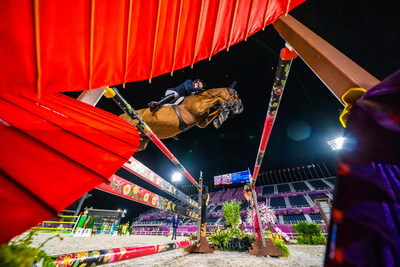 There was an edge-of-the-seat start to Jumping at the Tokyo 2020 Olympic Games today, with fluctuating fortunes in the opening first Individual competition. Only 30 of the 73 starters could qualify for tomorrow’s Individual medal-decider, and with many horses finding the atmosphere electrifying and the fabulous course of fences more than mesmerising, even the best of the best admitted that tonight’s 14-fence challenge was a big one. The colour and creativity of Santiago Varela’s course was nothing short of spectacular, and he gave them plenty to jump too.

Switzerland’s Martin Fuchs was partnering his superstar Clooney who carried him to Individual glory at the European Championships in Rotterdam two years ago, but he still found today’s opening competition a big test.

«The course itself wasn’t super tricky but what makes it difficult is that it’s the Olympic Games, the pressure is there, Clooney feels the pressure and I feel it, the rideability wasn’t as it should have been. But usually he gets better from day to day and I think now we have the most difficult round of the week behind us», Fuchs said.

Japan’s Daisuke Fukushima produced the first clear of the competition when seventh to go with Chanyon, and the host nation were hugely impressive when all three of their riders made the cut to tomorrow’s Individual showdown. Other nations who also have three riders through are Belgium, Great Britain, Ireland and Sweden while Fuchs will be joined by Swiss compatriot Beat Mandli and both Egypt and The Netherlands will also have two representatives.

Britain’s Ben Maher produced the fastest round of the night with Explosion W so has the best of the draw in tomorrow’s medal-decider. «We’ve been waiting a long time and edgy to get going. It was a big enough course today and a lot of horses are a little bit spooky, I don’t know whether it’s the new jumps or the lights and I felt that on him. This is my most nervous round of the week. He’s a horse that improves as the rounds go on, so he was having a little look today but he’s naturally a fast horse and he did everything he needed to do», Maher said.

Second-fastest of the night was Ireland’s Darragh Kenny riding Cartello. «Not a lot of people know the horse, I’ve only had him since May», Kenny pointed out. «He jumped great over the last couple of months, but this week will be a big ask. But he feels up to it and we’ve had a great start», he added.

Images
Images available on FEI Flickr for editorial use only.

Follow all media updates and competition results throughout the Games.

Click here for more information on Equestrian at the Olympic Games