CLEARWATER, Fla., July 28, 2021 /PRNewswire/ — On a Friday evening beach stroll, a good Samaritan came across a seahorse that was floating in the surf and brought it to CMA for treatment. Upon intake, CMA’s veterinarian confirmed that the seahorse had an over-inflated swim bladder and released the trapped air. Just a few days later while under observation, the seahorse gave birth to hundreds of babies.

The staff at CMA are monitoring both father and his babies to ensure they are healthy and have access to proper nutrition. The father continues to show reoccurring buoyancy issues which would impact his ability to survive in the wild and deem him non-releasable by the Florida Fish and Wildlife Conservation Commission. As the babies continue to grow and develop more independence, they will become candidates for release.

At this time, the region is experiencing elevated levels of red tide which is toxic for marine life, including seahorses, which will be under consideration when determining a release date. The wellbeing of the father and his babies are of top concern and they will remain under observation in our marine animal hospital.

Clearwater Marine Aquarium is currently accepting nominations to name the father seahorse on their website.

Clearwater Marine Aquarium (CMA) is a 501(c)(3) nonprofit working marine rescue center dedicated to preserving our marine life and environment while inspiring the human spirit through leadership in education, research, rescue, rehabilitation and release. CMA is home to rescue dolphins, sea turtles, river otters, stingrays, nurse sharks and more. Winter, the dolphin’s story of survival after injury that caused her to lose her tail, has impacted millions of people around the world. A major motion picture, Dolphin Tale, highlighted her life story in 2011. The sequel, Dolphin Tale 2, was released in September 2014 and features the incredible story of Hope, a young resident dolphin of CMA. The mission and potential to change people’s lives differentiates Clearwater Marine Aquarium from any other aquarium in the world. 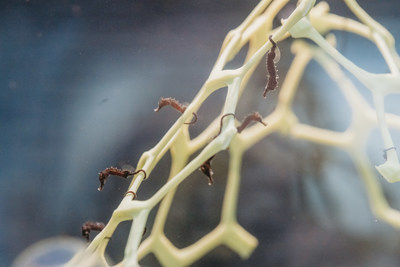