CHICAGO, Oct. 20, 2021 /PRNewswire/ — On October 26, Hindman Auctions will present a Sports Memorabilia sale, which will be highlighted by an impressive selection of Michael Jordan memorabilia, among collectibles representing other distinguished athletes. A singular object that will be offered is a Chicago Bulls vs. Los Angeles Lakers ticket from the first game between Michael Jordan and Kobe Bryant on December 17, 1996 (lot 258; estimate: $1,000-2,000). Certified authentic by PSA, only three additional examples of this historically significant ticket are known to exist and it is an important artifact from the first matchup between Bryant and his athletic role model, Jordan. The first matchup between two of the greatest basketball players of all time holds a special place in history, and this upcoming season marks the 25th anniversary of the game. 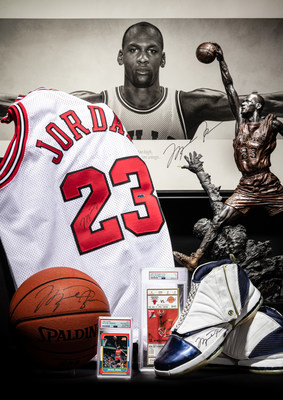 Another auction highlight is a 1994 Michael Jordan United Center Bronze maquette titled «The Spirit,» (lot 274) which was designed by Omri Amrany and Julie Rotblatt-Amrany, and will be offered with an estimate of $25,000-35,000. Modeled after the original that was unveiled at the United Center in 1994 when Jordan’s jersey was retired, only 123 of these were designed and only 55 were produced as part of a special charity fundraiser for the James Jordan Boys & Girls Club. Signifying Jordan’s United States Olympic Team jersey number 9, this maquette is 9 out of 123 in the series and is signed in the bronze by Jordan and Amrany and rests on a granite base. The model is a little over two feet tall (on a half foot tall base).

How to Bid
Bidding for the October 26th auction begins at 10 am CT. Bidders will be able to participate online only. Additional information about the auction can be found at the auction page here.

About Hindman
Hindman is one of the nation’s leading fine art auction houses connecting cities nationwide to the global art market and providing expertise across all categories, sales channels and price points. Hindman operates more salerooms in the United States than any other auction house and conducts over 100 auctions a year in categories such as fine art, jewelry and timepieces, modern design, books and manuscripts, couture, furniture and decorative arts, Asian art, Western art and more.