HARRISBURG, Pa., Aug. 5, 2021 /PRNewswire/ — It is with a profoundly heavy heart that we announce the passing of Richard L. Trumka, beloved President of the National AFL-CIO, proud Pennsylvania native, and extraordinary champion of labor and worker rights. 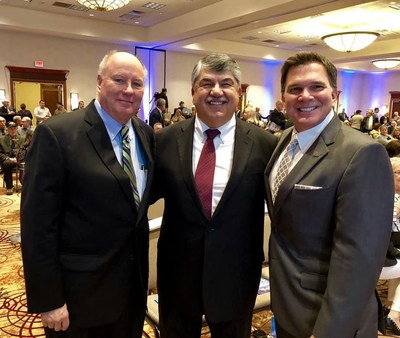 Richard L. Trumka was the president of the 12.5-million-member AFL-CIO. An outspoken advocate for social and economic justice, President Trumka was the nation’s clearest voice on the critical need to ensure that all workers have a good job, and the power to determine their wages and working conditions. He headed the labor movement’s efforts to create an economy based on broadly shared prosperity and to hold elected officials and employers accountable to working families.

«Rich Trumka’s passing today is a shock and tragedy» said Richard Bloomingdale, President of the Pennsylvania AFL-CIO. «I was so lucky to have known him for so many years. His commitment for workers nationally and in PA were unmatched. While Rich moved up the ladder of leadership, he never forgot where he came from as a mine worker and Pennsylvanian. I was incredibly proud when he took racism head-on in the labor movement in support of President Barack Obama. Rich had courage and heart – he never wavered in support of workers and union members. I will miss my leader and friend.»

«Prior to being elected Secretary-Treasurer of the Pennsylvania AFL-CIO, I worked with Rich for years at the National AFL-CIO» said Secretary-Treasurer Frank Snyder. «He was an inspiration and a mentor to me, and of course, to many others. But even more, he was my friend. We shared laughs and tears, victories and challenges, and Johnny Cash. By any measure, his life was beyond full – it was just too short. We logged countless hours and thousands of miles traveling this country together in those days. Often times when we’d reached our destination, Rich would quote Robert Frost and say ‘Frankie, the woods are lovely, dark and deep – but I have promises to keep, and miles to go before I sleep.’ Now sleep well, Richard. Sleep well.»

In 1982, at the age 33, President Trumka ran on a reform ticket and was elected the youngest president of the United Mine Workers of America (UMWA). There, in addition to reforming the UMWA’s fractious bureaucracy, he led one of the most successful strikes in recent American history against the Pittston Coal Company, which tried to avoid paying into an industry-wide health and pension fund.

President Trumka was elected AFL-CIO Secretary-Treasurer in 1995, and held that post until 2009, when he was elected president.

President Trumka’s commitment to improving life for working people began early. He grew up in the small coal-mining town of Nemacolin in Greene County, Pennsylvania. Nearly all the men in his family, including his father and grandfather, were coal miners. President Trumka followed them into the mines, working there as he attended Penn State and Villanova University law school.

President Trumka’s economic advocacy extended from the kitchen table and spanned the globe. He rallied international labor support for workers struggling for justice, and fought tirelessly to end unfair trade practices and restore U.S. manufacturing strength. As Secretary-Treasurer, he carved out an innovative leadership role that continued up until his passing, working with programs that invest the collectively bargained pension and benefit funds of the labor movement to ensure they serve the long-term interests of workers.

Solidarity and his determination to improve life for all working families drove President Trumka’s life as a labor leader. His dedication on pushing for comprehensive immigration reform was a central part of that goal. In addition to his domestic labor activities, President Trumka established an office that raised U.S. mineworker solidarity with the miners in South Africa while they were fighting apartheid. He further served as the U.S. Shell boycott chairman, which challenged the multinational Royal Dutch/Shell Group for its continued business dealings in South Africa.

As a labor leader, he received more honors and awards for his work than most heads of state. However, it was succeeding at helping workers to achieve social and economic justice through their union that made him the proudest in his professional career.

President Trumka envisioned an economy of shared prosperity for all working families—an economy of rising wages, equal pay, respect at work, safe jobs, secure retirement, and the freedom for all workers to form or join unions and bargain collectively. He knew what it would take to get there: solidarity and commitment. This is the core principle Rich Trumka carried from the mines of southwest Pennsylvania all the way across the world.

In honor and in remembrance of our leader and friend Richard Trumka, we are dedicated to continuing forward in the fight for solidarity and commitment that he spent his life building for all to have a chance to work in dignity and live well. Please keep your thoughts and prayers with his beloved wife, Barbara, their son Rich, and family during this time, as well as the hundreds of thousands of union brothers and sisters and the countless more who he impacted throughout his life.